By: Annie
In: Health, Homesteading
With: 2 Comments 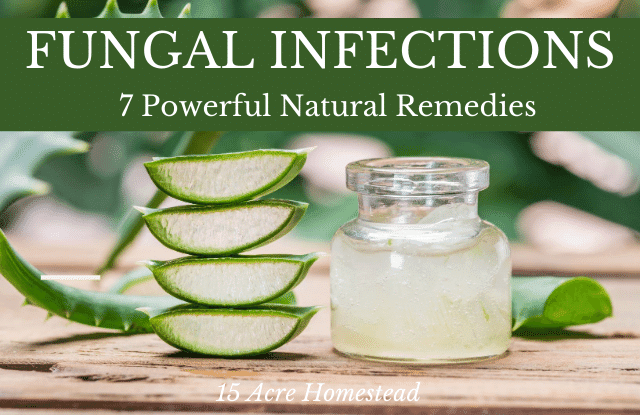 Fungal infections are skin diseases that are caused by a fungus. A fungal infection is also known as a mycosis, which is singular for mycoses.

While researchers are usually more concerned about disease-causing fungi, there are millions of other harmless fungi species out there. These organisms can thrive on any surface, including plants, on household surfaces, or in the dirt.

Some of them also live on human skin, where they could cause skin infections, especially among hosts with sensitive skin.

The most common symptoms of fungal skin infections include bumps and rashes.

The following are the main types of fungal infections:

Athlete’s Foot, one of the most common of the fungal infections, affects the feet. and is common among people who wear tight-fitting shoes. Tight-fitting shoes make it difficult for air to flow freely into the shoes, causing the wearer’s feet to become sweaty and swollen.

The moist conditions of the feet escalate the growth and proliferation of the fungi already living on the skin, leading to a full-blown infection. A scaly rash on the feet symptomizes an athlete’s foot. The rash usually causes a burning, itching, and stinging sensation.

Jock Itch refers to fungal infections that affect the genitals, buttocks, and inner thighs. It is common among people who wear tight-fitting clothing that traps moisture in and prevents fresh air from circulating into their groin area. Jock itch causes a red, itchy, ring-shaped rash.

Yeast infection, also known as candida infection or candidiasis, is mostly caused by the fungus candida. It affects the opening of the vagina (also known as the vulva), and surrounding tissues.

Since it attacks a sensitive area, the yeast infection can easily disrupt your routine. Symptoms include intense itchiness, swelling, and a thick, white vaginal discharge.

Ringworms, also known as tinea, is the most contagious of all fungal infections. It mostly affects the scalp (tinea capitis) or the skin (tinea corporis). The infection is spread by skin-to-skin contact.

You can also contract ringworms by touching an infected object. The most common symptoms are scaly (and sometimes) red ring patches on the scalp or skin.

Most fungal infections are treatable using antifungal drugs, oils, ointments, or home-based remedies. Either way, the treatments are harnessed from extracts obtained from various antifungal herbs and spices.

The following are the 7 powerful herbs/spices that can treat fungal infections.

Oregano has been used as a culinary herb from time immemorial. But besides delivering powerful flavors to your food, the herb can also treat fungal infections.

Oregano contains powerful antioxidants, such as thymol and carvacrol, which can help to fight fungal infections by reducing inflammation and itchiness that results from these infections.

The herb is usually processed into oregano oil and applied externally on the sore area. However, it can also be ingested by drinking fresh oregano concoction, or ground into a powder and administered topically.

Cannabis also produces terpenes that work alongside the cannabinoids to ease inflammation and itchiness caused by fungal infections, and people can even find higher quality terps to add into an existing product, like CBD oil or vape juice. As well as vaping and oils, cannabis can be ingested as edibles and capsules, or administered in the form of tinctures or balms. Alternatively, one can also DIY by buying cannabis products from a dispensary.

As time moves forward, more and more products with CBD in them have become available for use. For example, Hemp Genix offers cbd skin care which could be used to help alleviate many symptoms of a fungal skin infection, particularly inflammation.

Tea tree, also known as Melaleuca alternifolia, is a plant whose leaves are usually processed into an oil known as tea tree oil, and used to treat a wide range of medical conditions.

It possesses immense antibacterial, antiviral, anti-inflammatory, and antifungal properties. The plant contains an anti-inflammatory compound known as terpinen-4-ol that can help to improve recovery for people with skin conditions like acne and athlete’s foot.

Garlic is popularly used in different cuisines around the world as a seasoning and flavor enhancer. But besides its well-documented dietary benefits, garlic can also help to treat various conditions, including fungal infection.

The spice owes most of its antifungal properties to the sulfur compounds that are formed when you chop, chew, or crush a garlic clove. Some of those compounds include allicin, diallyl disulfide, and s-allyl cysteine.

Unlike most antifungal herbs whose extracts are applied topically, garlic is more effective when ingested.

Aloe vera is a herb whose popularity as a skincare home remedy goes way back. As early as 1959, the FDA had already approved Aloe vera-based over-the-counter skincare medications.

The herb boasts numerous antioxidants that belong to the larger family of compounds known as polyphenols. Polyphenols play a central role in inhibiting the growth of fungus on the skin.

Along with other compounds in Aloe vera, polyphenols help to escalate the healing of wounds and rashes, which may be beneficial for fungal infection patients.

Coconut produces coconut oil, which is rich in vitamin E and healthy fatty acids. That combination makes it a potent skincare herb, where it’s mostly used to relieve inflammatory skin conditions like acne and fungal infections.

As an antifungal remedy, coconut is particularly effective at relieving Candida albicans.

When looking for the best coconut oil for relieving fungal infections, ensure the oil is made up of 100% pure organic coconut. That allows you to apply it on the affected area without experiencing any irritation or other side effects.

Turmeric is another spice that’s used both for culinary and medicinal purposes, thanks to its antioxidant, anti-inflammatory, and antifungal properties.

The active ingredient in turmeric, known as curcumin, is often prescribed for the treatment of various fungal infections, particularly yeast infections.

To treat fungal infections using turmeric, you can either drink a concoction prepared from turmeric powder or apply turmeric paste topically. For topical application, always mix turmeric with a carrier oil as that enhances its bioavailability while reducing possible skin irritation.

Fungal infections don’t have to be a problem anymore. Not when there are scores of antifungal herbs that you can use to treat the condition. Apart from cannabis, all the other herbs can be legally cultivated and readily processed into home-based antifungal concoctions or powder.