Moving To Florida: What’s Different From Other States? 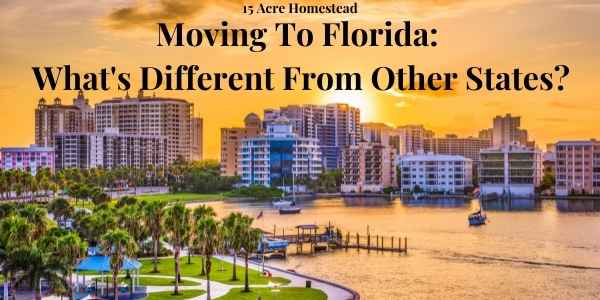 During the past year or so, an increasing number of people have decided to throw caution to the wind and move to Florida. But those who already live in the state don’t need to be reminded of its charms — or flaws. Still, whether you already have real estate in the Sunshine State or not, there may be some things you didn’t know about moving to Florida. So what makes the process of relocating in Florida so different than doing it in other states?

What Makes Moving To Florida So Special?

It Has a Unique Blend of Diverse Cultures

One of the best things about moving to Florida is being surrounded by a unique mixture of cultures. The southern part of the state is particularly influenced by Cuban, Caribbean, and other island cultures. All those influences are evident in the different kinds of foods you’ll find in Florida, which are a mix of European, island-inspired, and good all Southern fare.

The presence of the Hispanic population also means that there’s an emphasis on bilingual education. So if you’re moving from North Florida, which has a predominantly white populace, to the South, your kids will get a chance to learn an additional language or two on top of their mother tongue. Notably, though, Floridian schools typically start in the middle of August — which also means they let kids out earlier than most others.

There Are Many Fascinating Cultural Institutions

Outside of school, you’ll be able to treat your kids to all sorts of educational outings. The state is home to the Salvador Dali Museum, Ernest Hemingway Home and Museum, as well as the entire Ringling Museum complex.

If your kids have more peculiar tastes, take them to St. Augustine Pirate and Treasure Museum or the Kennedy Space Center instead. Alternatively, you can visit one of the many prominent performing arts centers around Florida. Depending on where at you are moving to Florida you’ll have access to different cultural institutions.

Meeting Your Neighbors Will Be Easy

Most people think of moving to Florida as going to a place where the elderly go to settle down. Alternatively, they might see it as a state that’s good for spring break and vacations, but nothing else.

Well, it’s true that many of the people who live in the state weren’t born there. But that just means that you’ll get to interact with an interesting cast of characters! You probably already know that meeting new people in Florida is easier than doing so in cities like Chicago or Boston. All you have to do is mention your favorite local sports team and let them continue the conversation from there.

Of course, tourists are another beast altogether, though you may be able to avoid them if you relocate away from the beach. Still, living in a beachfront town will open the door to all sorts of professions.

There Are Plenty of Jobs to Go Around

The upside of the booming tourism industry is that you’ll pretty much always be able to find a job. Even if the hospitality industry doesn’t agree with you, you’ll find plenty of other potential career options all over Florida. Aside from tourism, the biggest industries in the state are agriculture, aviation, life sciences, and financial services.

If you’re a real estate agent, you’ll be able to get in the game no matter where you decide to hang your hat. Properties in the state have a short turnover time, so you’re guaranteed sales.

Of course, the biggest surprise of moving to Florida in this regard may be that Miami is quickly becoming the country’s next tech hub. So if you want to dispel the stereotypes about pale tech bros, just make your fortune near a beach.

Many people are finding it relatively easy to acquire beachfront properties in South Florida. So if you’re looking to move to South Florida, there are plenty of homes, condos, and rental properties to go around! Check out agentgrouprealty.com for a 100% commission realty broker.

Even if the allure of living in the Sunshine State wears off after a few months or years, getting to a vacation destination is certainly easier if it’s only two towns away. And if you happen to like that town more than the one you came from, you can always move closer to it. Consider berryhometeam.com for your real estate needs.

If you’ve lived in Florida for a while, you’re probably familiar with the main draw of the state. Namely, Florida is one of the few places that have no personal income tax.

Yet if you already live in the state, you’re probably also aware that the non-existent income tax also means that you may have to fork over more money on getting a driver’s license and car registration. To be safe, you might want to research local DMV prices before deciding you’re moving to Florida.

The Weather Is Heavenly — and Occasionally Hellish

There’s no way to talk about moving to Florida without mentioning the weather. After all, they don’t call it the Sunshine State for no reason!

The glorious climate has a wonderful effect on the local flora, which includes all sorts of wildflowers. You’ll also have an opportunity to see a variety of trees such as magnolias, palms, and even pine forests. Elsewhere in the state, you’ll see thriving orange groves, as well as tomato, strawberry, and watermelon farms. So depending on where you want to move, you can have a totally new perception of Florida!

Of course, chances are you’ll still have to deal with different kinds of critters. So if you’re looking to relocate to a place with a pool, you’d better build a sturdy fence around it!

And as delightfully bright and clear as the local weather can be — it can also be pretty difficult. From the beginning of June to the end of November, you should be ready for some pretty bad weather.

Final Thoughts on Moving to Florida

Since the majority of the year is blessed with warm weather, Floridians have plenty of time for outdoor activities. But moving to Florida isn’t all about visiting award-winning beaches, golf courses, and getting resident discounts for local theme parks. You’ll also have to make sure that your home is truly ready to withstand the tricky weather and animals. Still, if you’re looking to relocate within the state, you can just take all those things into consideration before you purchase your new home.