Moving To a Rural Area: What Should You Know 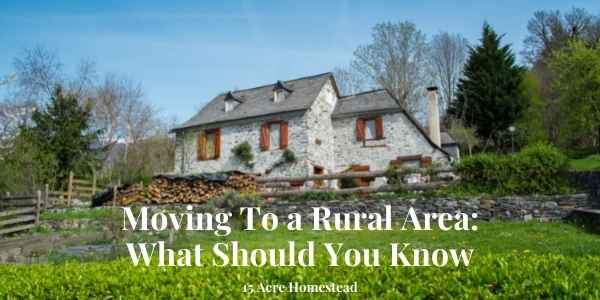 In the 20th century and the early part of the 21st century, everyone was moving to cities. And, in truth, they still are — but there’s a growing movement of people who are deciding to say goodbye to cosmopolitan life and are moving to a rural area.

The reasons for this are manifold. For one, the spread of the internet and remote working has made it possible to do jobs from anywhere; many people, after all, moved to the city for work purposes. The other reason is that cities can become a little tiring, and make people yearn for the great outdoors!

If you’re going to move to a rural area, however, then there are some things that you should know. In this blog, we’ll take a look at some of the key things to understand before moving to a rural area!

Moving to a Rural Area

The city isn’t perfect, but you have to say, it can be pretty nice to know that you can get whatever you want, at any time of day. Fancy some sushi at 3 am? There’ll be a place nearby. When you live in a rural area, you’ll likely not only have to put up with not having the option of eating sushi at 3 am, but eating sushi at any time. And that’s just one type of food. Hospitals, banks, and other staples of daily life might be a drive away, too.

One of the advantages of moving to a rural area is that there aren’t too many people, which can be a dream when you’re coming from a city that’s packed with people. But this can also be a disadvantage, especially if you like the anonymity that the city provides. In small towns, everyone knows everyone — and since there won’t be too many places to hang out, you’ll likely see them all the time. Newcomers will be thin on the ground. This isn’t a bad thing, of course, but it’s good to know before you move.

Living Near — And With — Creatures

Humans have well and truly dominated the city. They have dominated the rural areas, which are still pretty natural. That means that you’ll encounter many more creatures than you would if you were living in, say, New York. They’ll be in the fields near to you, but, from time to time, you might find that they’re in your home. You’ll likely have to call a tick control company at some point or another! The good news is that if you were terrified of creepy crawlies before, living a rural life will ensure that you move past that fear.

A Slower Pace of Life

It’s easy to get sucked into a crazy pace of life in the city. Everything moves so fast. In a rural area, it’s the opposite — everything moves slowly. This can be a little disconcerting in the early days, but you’ll soon get used to it. And eventually, you’ll likely wonder how you lived any other way. There’s just something about the peaceful way of life!