How to Protect Honeybee Hives from Aggressive Wasps

By: Annie
In: Animals, Homesteading
With: 3 Comments 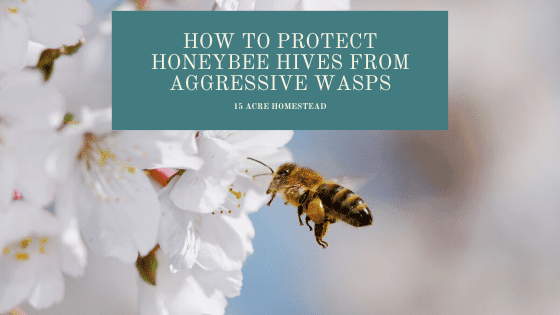 Recently, there has been some discussion in the news about the discovery that there are “murders hornets” in the USA: Washington state, to be specific. If you are a beekeeper, the thought of having your precious honeybees ravaged by the nasty hornets is less than awesome. The Asian giant hornets feed on honeybees by ripping their heads straight from their bodies and decimate honeybee hives rapidly.

However, if you’re new to beekeeping, you may not be aware that murder hornets aren’t the only predator of a honeybee.

From bald-faced hornets to yellow jackets, some wasps and hornets prey on honeybees and can ruin a hive. A common misconception is that all wasps are aggressive, which is not at all true, and many wasps help pollinate a variety of plants.

Trying to kill all wasps would be incredibly catastrophic, and nearly impossible on your homestead. There are steps to take to protect your honeybee hives, allow positive pollinators like non-aggressive wasps to exist and help pollinate your tomatoes and fruit trees, and eliminate the aggressive waps that are fatal to your furry bees.

Act Early in the Year.

In Spring, the only active wasps or hornets are queens. This means that every aggressive wasp you catch in spring can reduce a potential colony by up to thousands later on in the summer.

To catch the active queens, set out either homemade traps or over-the-counter trap options as soon as the weather starts warming up. Another option is to prepare for next year by catching the hornets in late autumn when many of the worker waps have already died.

Place your Beehives in the Sun

Yellowjackets can fly in cooler temperatures than bees. So, to give them a bit of advantage for leaving their hives earlier in the morning and being on the ready, place the hive in the sunshine. A weak or young hive can not always fend off the aggressive invaders, while a hearty beehive will do hard work to try.

Yellowjackets not only kill the living bees; they’ll eat the larvae and rid the entire colony of every last drop of honey. By placing a hive in a sunny area for morning sun, the hive will wake up and be active by the time any aggressive wasps come knocking. This allows honeybees to actively fight them off before they invade the hive. (Try to allow the hive to have some afternoon shade, though, to keep them from overheating.)

If you have multiple established wasps or hornet nests on your land or near your honeybee hives, you may need to call a professional pest control company to help you deal with the aggressive invaders. Make sure if you are using a pest control professional that they are aware of your concern regarding your honeybees, and ask for them to use an eco-friendly wasp treatment.

While honeybees are not the only pollinator, protecting them from aggressive wasps and hornets is a continual process to ensuring great pollination across a homestead while also receiving the delicious sweet treat of honey that they create.

2020-05-12
Previous Post: The Secrets Of Successful Rentals
Next Post: Make Comfort a Key Focus in Your Home This Year