Breeding Goats on your Homestead

By: Annie
In: Animals
With: 6 Comments

Breeding goats is a strategic process, you do not simply turn a buck loose with all of the does and hope for a bunch of kids awhile later. You need to know when to breed your does and how to choose the buck that will breed with them. You need to be aware of what takes place during the doe’s pregnancy, you need to learn about the birthing process. Once you have a better understanding of these processes, you will be more successful when breeding goats on your homestead. 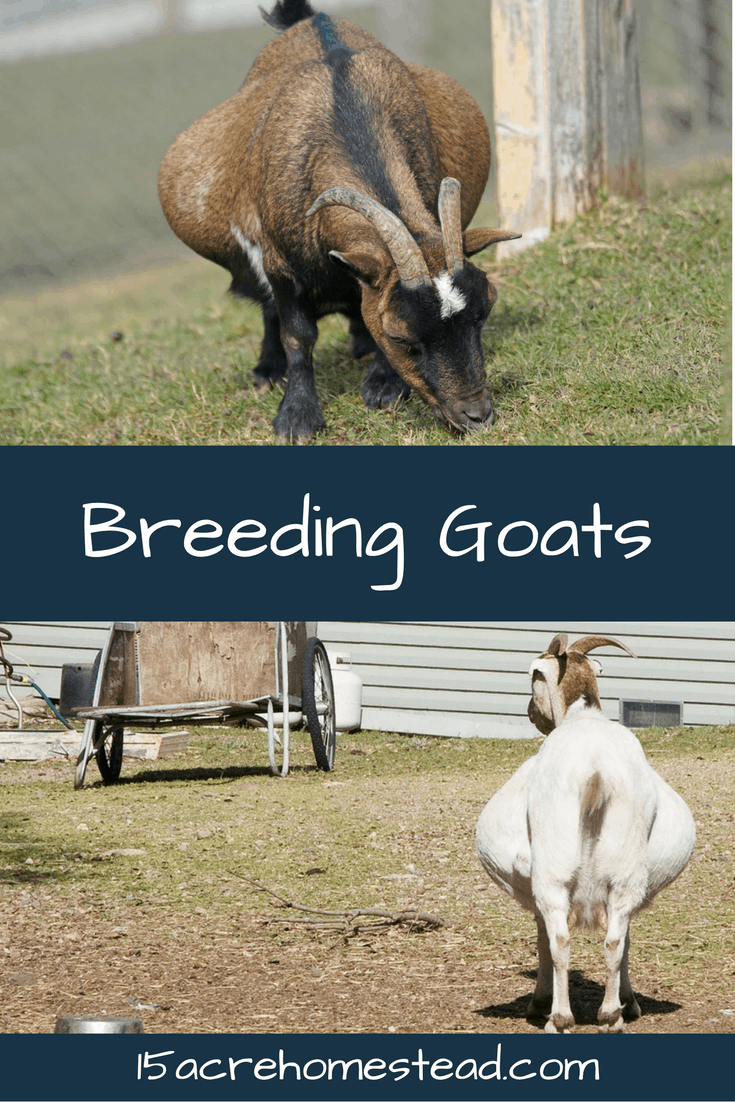 If the female goat is not bred or does not become pregnant, she “goes into heat” regularly, this is called estrus. This time period is called her breeding season.The time between one heat and the next is usually between 18 and 21 days. Hormones run by the brain guide the menstrual cycle and can be heavily influenced by sights, smells, hearing and feeling. The doe will remain in heat for around 36 hours and the chance of her becoming pregnant are the greatest around 15 hours after coming into heat. For the beginner, it may be difficult to tell if a goat is in heat. There are usual signs of heat you can watch for. 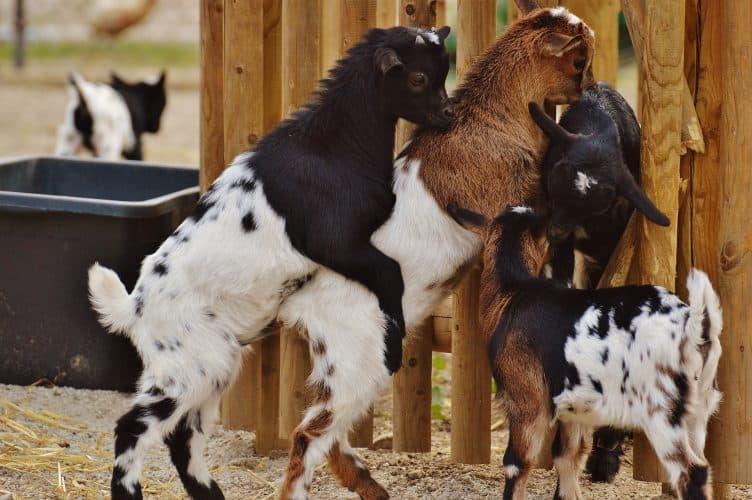 A doe can actually be bred at around 6 months old, this is not recommended, though. A doe should not be bred until she is around 9 months old, this is when she reaches her mature weight. Breeding her to early could produce fewer kids and the kids are usually smaller than average. If the doe is bred at 9 months of age, the kid will arrive when she is 14 months. Breeders use a method called flushing to allow a doe to become pregnant easier. With this method the breeder allows the doe to gain weight before breeding her with a buck, it allows more eggs to flush from the ovaries increasing the chance of pregnancy.

Breeding can be done by artificial insemination or by allowing her to interact with a buck owned by you or someone else. One piece of advice if you intend on letting her breed with your own buck is to separate the buck from the rest of the herd. The buck will become protective during breeding times and could cause dangerous situations with the other goats. The buck will also try to mount and terrorize every goat in reaching distance.

When a doe is bred successfully she has settled, she is pregnant. If she does not settle the breeding was unsuccessful and she will come back into heat on her next cycle. After settling occurs, she will begin a period of gestation, this lasts about 5 months or 150 days. The number of kids she will produce is determinate of her age, older does usually give birth to more kids than a doe with her first pregnancy. The process of flushing bears weight also on the number of kids a doe will have. A doe that is herself a twin, triplet or quadruplet is more likely to do the same.

Does are still milked when they are bred. Later in the pregnancy, the goat will “dry off”. It is a good practice to dry off a doe 2 months prior to birth. The production of milk is a big demand on the goat’s body as is growing the unborn kids, the kids are far more important than the production of milk.  The best way to dry off a doe is to stop milking her, do not do it gradually because this leads to fibrosis of the udder which causes lower milk production later.

A fibrous diet with rather low protein is preferred is the ideal circumstance during the first 3 months of pregnancy. Too much feed produces kids that are too large to be easily delivered, excess minerals will produce kids whose bones are too solid.  Most of the growth of the kids happens during the last 8 weeks of pregnancy, during this period, protein needs only be around 12%, however, there will be a higher need for minerals and vitamins like iodine, calcium, and vitamins A and D. Vitamins A and D can be given as an injection by your veterinarian. Beet pulp is required, and molasses can provide the necessary sugar.

The Miracle of Birth

When breeding goats, the birth of a kid or kids is definitely the reward. Prepare a clean place for your doe to birth in, make sure there is fresh bedding. It is not recommended to take a goat that is preparing to give birth out of the heard until after the birth of her kid or kids so allow her to remain involved for now. A few days before she gives birth the udder will swell, although this is not always the case. She may not eat the concentrate when she is ready to give birth but if she misses two meals in a row it could be a sign of pregnancy toxemia. This occurs when a doe draws too much energy from her own body to help feed a developing kid and becomes weak herself, a veterinarian should be called to address this.

Just before birth, the kids will shift closer to the birth canal, she will then become more affectionate towards you. Birthing is close when she starts pawing the ground, acts restless, and repeatedly lies down and stands up. She will suddenly discharge mucus, move her to a private stall at this time. Birthing is about to happen.

This is the final step of breeding goats and is usually the step that most missed out being a part of unless you are actively helping your doe through the process.Most of the time, human interaction is not necessary when goats give birth, unless there is a problem, leave the doe alone. Those fortunate enough to be an active member will see the next few steps before the kid or kids arrive.

Steps of the birthing process

Anywhere between 1/2 an hour to 12 hours after birth the doe will pass the afterbirth. Usually, she will eat it, however, some does will leave it laying there, in which case you must dispose of it. If you see the afterbirth hanging from the doe, leave it in the hopes she will eventually pass it. If it does not get passed withing twenty-four hours, call the veterinarian. Because the doe loses so much fluid during the birthing process, it is important to supply her with a bucket of fresh water. Molasses can be added to the water for extra energy replacement. Feed her as usual at this point. You will notice a bloody discharge, this lasts about 14 days. Simply clean the area with warm soapy water twice a day and pat it dry.

Knowing and understanding the reproductive cycle as well as the events that lead up to the birthing process will help you to be better prepared and avoid potential problems for both your doe and her kids when breeding goats on your homestead. The reward is seeing those healthy and happy kids when they come into the world! Have you experienced the birth of a kid on your homestead? Tell me about it and share a picture in the comments below.