By: Annie
In: Gardening
With: 0 Comments 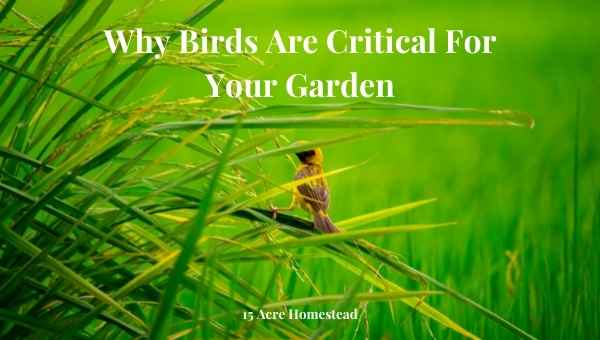 We tend to think of birds as something that’s “nice to have” in our gardens. But it turns out that they’re absolutely critical. Without them, our gardens just wouldn’t be the same. And not just for the usual reasons you might think.

Birds, for instance, are great for controlling pests. Farmers typically become inundated with unwanted wildlife when the ecosystem becomes unbalanced. There simply aren’t enough of them to keep the insect population at bay. Their numbers multiply uncontrollably.

Why Are Birds So Important?

Remember, birds keep insect numbers down through all stages of their lifecycle. During the spring, they will feed on insect larvae. Then, in the summer, they snatch full-grown insects out of the air or as they make their way along branches.

They are also critical for pollination. As they move from tree to tree, they brush up against flowers, with some of the pollen getting onto their feathers. This then sloughs off over time and gets deposited on other trees.

Finches and other small birds also play a critical role in keeping weeds at bay. Have you ever noticed that weeds in some years are worse than in others?

It’s not just the weather, climate, or chance. Instead, it has to do with the level of feeding activity in your garden. Finches, for instance, will often eat a large number of seeds early in the year, reducing the likelihood of germination later on.

Overall, a large bird population is usually a sign of a healthy ecology. Gardens and homesteads that naturally attract birds typically have greater biodiversity than those that don’t.

How To Attract Them To Your Garden

If your homestead is lacking birds, there are several things that you can do to encourage them to come out in force.

Birds, like practically every large creature, need a combination of food, water, and shelter.

Water is surprisingly easy: just install a birdbath or build a pond. Food is also relatively simple to take care of. Just get a bird feeder and hang it from a tree. JCs Wildlife discusses some of the different types of feeders available, and which species they may attract to your garden.

Perhaps the most difficult part is to provide shelter. Most of them will make nests in trees. However, in some cases, nests aren’t sufficient. They’re highly vulnerable to the weather and predation.

Bird boxes are a much better idea, particularly for smaller ones. They offer protection from predators and the weather, and they will last season after season. You don’t have to stick with just one bird box in your garden. You’ll soon find that you can easily fill five or six.

If you are in a bind, you can actually make their food yourself. People usually make it using a combination of lard and commercial bird food.

However, you’ll need to ensure that only birds eat it. If you leave it on the ground, it will attract squirrels and, possibly, rats too.

Bird food containers help to prevent both of these problems, ensuring that birds get more of the food that you leave out for them.

2021-11-08
Previous Post: Jobs That You Should Not Tackle Yourself
Next Post: Secure Parcel Delivery: When You’re Not At Home