Should You Consider Using Alternative Treatments?

By: Annie
In: Health
With: 0 Comments 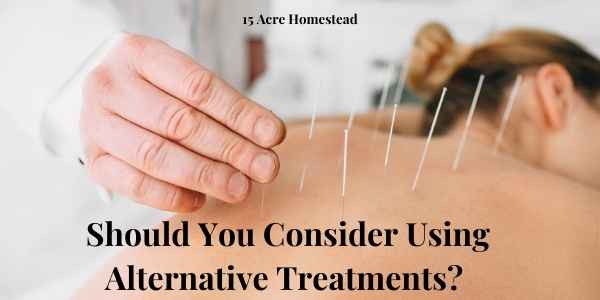 The modern-day is a time of convenience and speed. Whenever we face some kind of condition such as a headache or joint stiffness, we just take medication or stretch our muscles a bit to get it over with. We all have ways to relieve minor annoyances in life, but things are starting to change. Alternative treatments are being considered.

More and more people are starting to take a holistic approach to their health. They’re beginning to see just how interconnected all of the different aspects of life are. They’re also noticing just how important it is to improve our lives from the ground up instead of just focusing on singular things.

One of the most notable changes is the popularity of alternative treatments as a way to overcome reliance on medication. Drug dependency is a serious problem that many people have faced before. Medication, in general, is something that people want to stay away from. They’re uncomfortable about putting things in their bodies that they don’t completely understand. This has given rise to many alternative treatments, but is it just snake oil or something worth considering?

Be Mindful of the Alternative Treatments That You Try

Let’s get this out of the way first; yes, there are scams and there are people who are out to get your money while selling you a fake or ineffective product. However, there are also some people that are adamant that their product works despite it being ineffective for others. There is a large mixed bag of people in the world of alternative treatments. We generally suggest doing plenty of research before you decide to do anything.

There are a couple of treatments such as acupuncture and chiropractic care that is starting to gain more traction in the scientific world. This means that they’re slowly being accepted as legitimate treatments that can offer benefits to their patients. This is a far cry from the past when they were seen as nothing but gimmicks that sold a fake promise. Thanks to their persistence, more and more people are starting to look at alternative treatments as a way to avoid taking unknown medication and building reliance on those drugs.

Alternative Treatments can be Easily Incorporated into your Life

There are a couple of alternative treatments such as aromatherapy that can fit within your busy lifestyle. They typically don’t need an appointment. You can even do it at home by having a diffuser and the right oils. There are plenty of guides on the internet on how to get the most from a diffuser and oils. You can even buy entire sets of essential oils so you have plenty of different types to work with.

2021-09-24
Previous Post: 3 Ways to Add Value to Your Home
Next Post: Intelligent Remodeling Ideas For Your New Garden